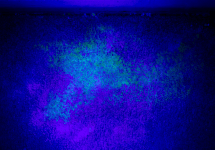 Most of you have probably used a UV light to detect urine spills in carpets, upholstery and flooring. But why does urine glow like that? And more importantly, why do urine spots sometimes still glow under UV after they’ve been treated? We asked Werner Buchman, chief chemist with Legend Brands, to provide some explanation.

Urine is a complex organic chemical mixture containing primarily phosphocreatine—a chemical containing phosphorous—as well as urea and creatinine. After the urine is deposited and biological breakdown begins, these chemicals create ammonia and other nitrogen-based compounds that deliver the strong smell associated with urine. Un-Duz-It Unleashed eliminates all three compounds and removes the odors generated as well as the pigments excreted with the urine.

After cleaning with Unleashed, the area may still glow when observed under UV light. (Actually, the correct term is “fluoresce”—the treated area is reflecting the UV light back to your eyes as visible light.) This fluorescing is not due to the presence of urine in that spot, but from phosphorous left over from the breakdown of phosphocreatine by Unleashed. During that process the phosphorous becomes chemically bonded to the fibers as a dye would. Just like a dye, the phosphorous is now part of the surface of the fibers, and it is quite difficult to remove it without damaging the existing dyes on those fibers.

Fortunately, there is little need to remove the phosphorus as it has no odor and leaves no visible stain. Unleashed has fundamentally altered the chemistry of the original urine deposit so that no urine odors can be produced.

VIDEO: Un-Duz-It™ Unleashed eliminates pet stains and odors in one step at virtually half the cost. https://www.youtube.com/watch?v=YjiBWLqMQKU
Thanks Legend Brands Cleaning